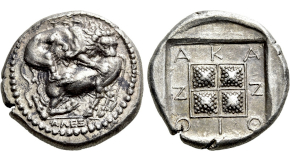 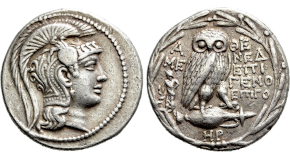 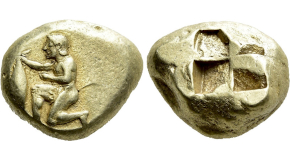 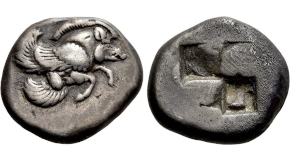 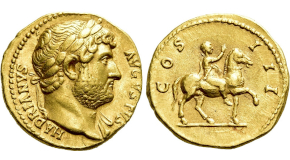 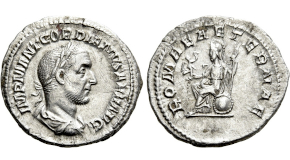 Very rare, superb portrait and well centered. Marcus Antonius Gordianus Sempronianus Africanus, better known as Gordian I, was Roman emperor for a few weeks in 238, together with his son Gordian II. Gordian I came from a wealthy family of the equestrian order related to several senators. The name Gordian suggests an Anatolian origin, from the city of Gordius. He had a sister, Antonia Gordiana, who was the mother of Gordian III. It seems that Gordian accepted the empire in old age only on the condition that his son would be associated with it, in order to succeed him. His political career began as Quaestor under Elagabalus and as Praetor and Consul under Severus Alexander. He also wrote an epic poem entitled The Antoninians to celebrate the emperor Caracalla. Gordian commanded the Legio Scythica in Syria. He held the office of governor in Britain in AD 216 and was consul suffectus under Elagabalus. The fact that his name was erased from some inscriptions in Britain suggests that he was disgraced and later rehabilitated. After a rebellion in Africa in 238, mainly because of the exorbitant taxes imposed by Maximinus, Gordian accepted the imperium offered by the army and also the title of Africanus. He entered Carthage acclaimed by the crowd and politicians, while in Rome the prefect of the Praetorians was assassinated. The Senate, happy to deprive Maximinus, accepted the new emperor, and most of the Provinces sided with him. However, Capelius, governor of Numidia and supporter of Maximinus Thrax, invaded the province of Africa with the Legio III Augusta, composed of veterans. Gordian II, was defeated and killed in the battle of Carthage. Following the death of his son, Gordian I committed suicide by hanging himself with a belt, after just twenty days of reign 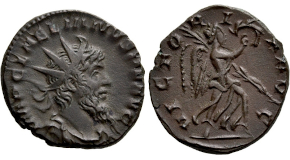 Ulpius Cornelius Laelianus, also called Lollianus, reigned for only a few months, in 269 AD before being killed. He was a usurper of the Emperor of Gaul Postumus and is included in the list of Thirty Tyrants in the Historia Augusta, but little is known about his origins. Postumus was a commander of the Limes Germanicus who rebelled around 260 and proclaimed himself Augustus after killing the Caesar Saloninus, son of Gallienus. He had created an empire in Gaul with its own senate, consuls and praetorians, with a capital at Augusta Treverorum (Trier) and a mint at Lugdunum (Lyon), which Laelianus also used. In 268, one of Postumus’s officers, Ulpius Cornelius Laelianus, rebelled against him by proclaiming himself Augustus in Mogontiacum, in Germania Superior, where the Legio XXII Primigenia was stationed, of which he probablu was the commander. However, his rebellion lasted only two months, then he was beheaded, either by his own soldiers or by the soldiers of Postumus, who were besieging the capital. The siege of Mogontiacum was lethal for Postumus too. He was killed by his own soldiers for refusing to allow them to plunder the conquered city, and was immediately replaced by Marcus Aurelius Marius. 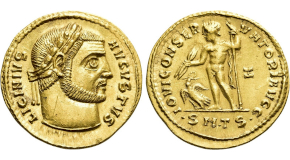 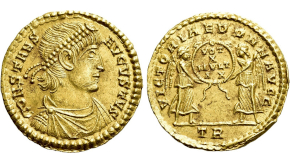 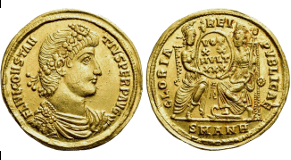 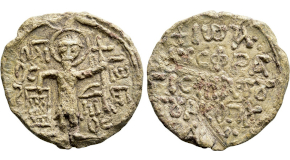